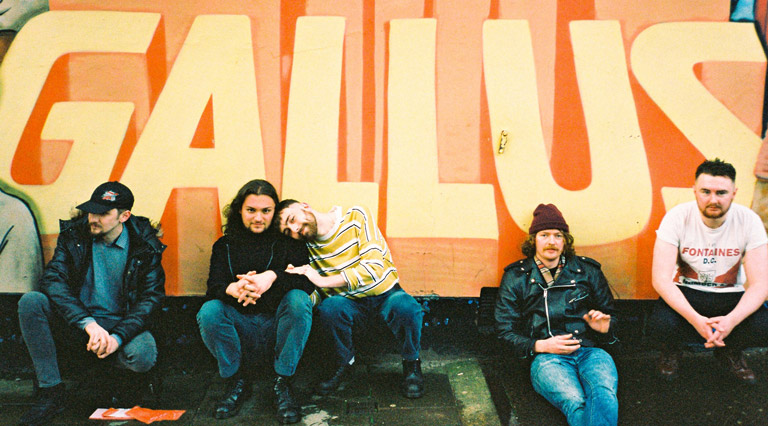 From the moment they formed in a pub in Glasgow of the same name, Gallus have been on an unrelenting assault on the country’s fertile music scene. They quickly garnered a reputation as one of the best live acts in Scotland and soon took to filling venues everywhere they went. In the space of 12 months they went from filling a 200 cap to a 600 cap venue in Glasgow’s Tenement Trail Festival. Their notoriety for live exciting live shows also saw them sell out the famous King Tuts and receive a nomination for Best Live Act in the Scottish Alternative Music Awards.

On top of their live prowess, Gallus have been making an impression in the music industry with their varied and adaptable approach to songwriting. Their catalogue stretches across the broad church of punk and post-punk music as they meander into new and exciting musical territory with each release.

Gen and the Degenerates

Gen and The Degenerates, write music that digs up the Rock ‘n’ Roll of days gone by, reincarnating and redefining it through the modern lens of frontwoman Gen Degenerate. Drawing as much influence from Howlin’ Wolf as she does from Amy Winehouse, Gen writes self-confessionally about navigating the highs & lows of life as a queer woman. The Degenerates meanwhile, a mischief prone and menacing outfit, drive their song’s forward with a sound that calls to mind a combination of the rhythmic blues of The Rolling Stones and the larger-than-life live sound of Foo Fighters. Together they create a formidable alt-rock force, relishing in taking command of the stage to deliver catchy choruses and anthemic riffs; leaving audiences wherever they play in awe. Those who see them perform learn, as everyone does, that watching this band is witnessing the modern rebirth of rock ‘n’ roll.